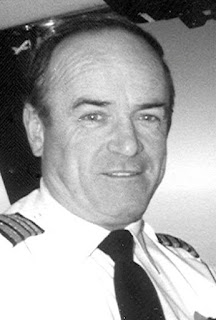 Notification with the passing of Delta Golden Wings member retired Delta pilot Captain Edward J. McHugh Sr., age 90.  Captain McHugh joined Delta Air Lines 03-05-1956 and retired with Delta in 1988, based Atlanta.  He is survived by his wife Elizabeth ‘Betty’ plus many other friends and dear family members.
Captain McHugh’s obituary may be viewed online at http://clevelandbanner.com/stories/edward-mchugh,95148
You may share memories and condolences online at the funeral home website:
https://www.serenityfunerals.com/obituary/edward-mccugh-sr
The family will receive friends tomorrow February 28th from 5-7 PM at Serenity Funeral Home in Cleveland, Tennessee.  A Funeral Mass will be held March 1st at 11 AM at St. Therese of Lisieux Catholic Church located in Cleveland TN.
For those wishing,  personal condolences may be sent to the McHugh family at
3845 Westview Dr. NE,  Cleveland TN 37312-5057.
Thank you,
~ Carol
Obituary................
Capt. Edward J. McHugh Sr., passed away on Sunday, Feb. 24, 2019, at the age of 90. He was born March 7, 1928, to the late Edward Bernard McHugh and May Elizabeth Gilfoy McHugh. He died peacefully in his home, surrounded by his family and is now resting with his Lord and Savior, Jesus Christ.
He was born in Chicago, and served proudly as a sergeant in the United States Army during the Korean War. He retired from Delta Airlines in 1988, after 32 years as an airline pilot. He was a member of St. Therese of Lisieux Catholic Church. He loved sharing stories about his adventures as an airline pilot. He was an avid traveler, whistler, tinkerer and lifelong learner. He was often referred to by his 16 grandchildren and 18 great-grandchildren as "Gramps the Boss."
He is survived by his most beloved wife of 69 years, Elizabeth (Betty) Ann Healy McHugh; children: Donna (Vernon) Liebert of Dunwoody, Ga., Kathleen (David) Goldstein of Stuart, Fla., Patricia (Gary) Cason of Seneca, S.C., Betty (Timothy) Kelbel of Cincinnati, Ohio, Terri (preceded in death Jerry) Iven of Jenson Beach, Fla., Edward J. (Karen Christina) McHugh Jr. of Tampa, Fla., Timothy P. McHugh of Cleveland, Mary (Blake) Thomas of Johns Creek, Ga., and Michael (Jennifer) McHugh of Stafford, Va.
The family will receive friends from 5 until 7 p..m. Thursday, at Serenity Funeral Home at 3010 N Ocoee St, Cleveland, with a Rosary service beginning at 6:30 p.m. A Funeral Mass celebrating Captain McHugh's life, will be held at 11 a.m. Friday, March 1, 2019, at St. Therese of Lisieux Catholic Church, 900 Clingan Ridge Drive N.W., Cleveland. Columburial service will follow on the grounds of St. Therese Catholic Church, with military honors concluding the service.
In lieu of flowers, donations may be made in the name of Edward J. McHugh Sr. to Hearth Hospice, 1800 Rossville Ave., Suite 114, Chattanooga, TN 37408.
We invite you to send a message of comfort and view the family guestbook at www.serenityfunerals.com


Serenity of Cleveland Funeral Home and Cremation Services is in charge of arrangements.
Posted by death at 12:32 PM