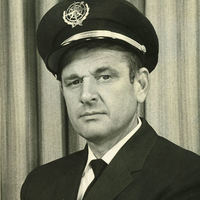 Notification with the passing of Delta Golden Wings member retired Northeast/Delta pilot Captain Donald Kittridge Moulthrop, age 92.  Captain Moulthrop first joined Northeast Airlines 06-18-1958 and retired with Delta Air Lines based Boston.  He is survived by his wife Priscilla, their children and grandchildren.
Obituary information may be viewed and share your memories online at the funeral home website:
https://www.finnertyandstevens.com/obituary/donald-moulthrop
SERVICES: Calling hours, Nov. 15th from 4:00-7:00 PM at Finnerty & Stevens Funeral Home, Great Barrington MA.
Funeral services will be held at 10:00 AM on Nov. 16th at The First Congregational Church in Great Barrington MA.
For those wishing to send a personal note, condolences may be sent to the family at
35 Silver St.,  Great Barrington MA 01230-1925.
Thank you,
~ Carol for the PCN

Obituary…………….Donald K. Moulthrop, 92, passed away November 12, 2019 with his loving family at his side. Donald was born in Lyndonville, VT on February 4, 1927, son of Raymond and Ruth Hudson Moulthrop . He grew up in the Risingdale section of Housatonic, MA. Donald graduated from Searles High School, Great Barrington, MA in 1945. In 1943 he met the love of his life, Priscilla Adams. They were married June 24, 1950.

As a teen, Don learned to fly airplanes at the Great Barrington Airport, and during World War II he enlisted in the Army Air Corps. After his discharge from the Air Transport Command, he obtained an aircraft and engine mechanics degree from Boston University, New England Aircraft School. Upon graduation, he returned to Great Barrington Airport where he worked as a mechanic, flight instructor and charter pilot. He then flew for a local airline that operated between Pittsfield and NYC. He was hired as co-pilot and flight engineer with Northeast Airlines in 1958, and retired in 1987 as Captain with Delta Airlines. He also operated a popular Christmas Tree Farm on Silver Street in Great Barrington for many years.

Donald was the Moulthrop family genealogist, and enjoyed sharing his research. He always looked forward to visiting the Moulthrop family homestead in the Northeast Kingdom of Vermont. He also enjoyed his numerous family pets, especially Sparky, Apollo and Obie. He loved traveling, gardening, fixing things, and riding his farm tractors and motorcycle. He loved all kinds of music and played several musical instruments.

Memorial contributions may be made to HospiceCare in the Berkshires in care of Finnerty & Stevens Funeral Home, 426 Main St., Great Barrington, MA 01230. To send remembrances to the family, go to www.finnertyandstevens.com